ANY ATTEMPT WILL END IN CRUSHED BODIES AND SHATTERED BONES 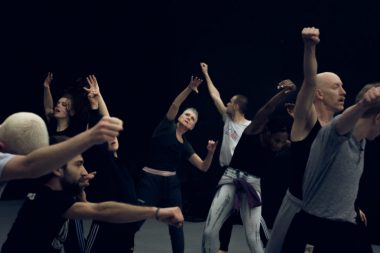 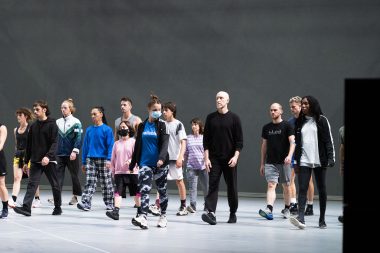 Production: GRIP
In collaboration with the Dance On Ensemble

In his new piece any attempt will end in crushed bodies and shattered bones, Jan Martens works with 17 dancers of different ages – between 15 and 68y old – and reflects on the (non)sense of progress, and standing still as an act of rebellion.

any attempt will end in crushed bodies and shattered bones is a work about standing up and demanding change. The title refers to the threats Chinese president Xi Jinping uttered in October 2019 during the Hong Kong protests (paraphrased by CNN (*)). This type of violent language seems engrained in today’s society. From the speeches of important political figures like Donald Trump over online comments: we notice an increase in everyday rhetorical violence, that could easily spill over into real violence. The constant stream of loud, direct and harsh language and false truths – in which words become exempt of meaning – is no longer questioned. We take it as it is, shrug our shoulders and go on. Indifference reigns.

It has become increasingly important to contemplate on the significance of language. any attempt will end in crushed bodies and shattered bones reflects on the matter through the particular language that is dance. Despite its dark title this work is filled with hope. For without hope of improvement, one doesn’t strive for change. Old and new ways of protesting – such as sit-ins, kiss-ins, die-ins, lock-ons, slut walks, riots, boycots, strikes, soapboxing and radical cheerleading – inspire a choreography of walking, of standing up and standing still, of setting things into motion.

any attempt will end in crushed bodies and shattered bones looks at the moments when an individual – or the group as a whole – goes against the flow, stands still, or retreats to the margins. It will be a rich performance that does not hesitate to seek out the ecstatic before retreating a few moments later to the hyper-intimate. From hard to shamelessly romantic. With a wide-ranging soundtrack that, among other things, contains protest songs from different eras. A performance that aims to be an ode to civil disobedience, stepping out of line and conjuring progress. What happens if one day you decide to simply not participate anymore?