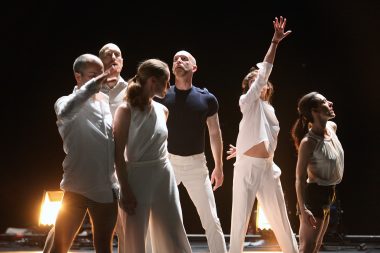 In artistic collaboration with the DANCE ON ENSEMBLE


Philip Danzeisen was born in Essen/Germany, grew up in Frankfurt Main/Germany. Raised in a family of actors, he developed an interest in combining theatre, dance, and music early on.
In 1994 he moved to New York to study drums at the New School University and received his BFA in 1998. 2006 he received a scholarship for the Sound Design program of the Theater and Dance department at UCSD where he studied for one year. Philipp is based primarily in Berlin. Performing credits include appearances in pieces by Einar Schleef, Jan Fabre, William Forsythe/Ballett Frankfurt, Tom Kühnel/Schaubühne Berlin, and Walter Fischbacher (New York). In addition, he has designed and performed several of his own sound projects; for example, a piece at the Artaud exhibition at the Kunstpalast in Düsseldorf. He has also worked as a sound designer and musician for fashion shows by Hugo Boss and Costume National in Milan. In 2005, Philipp toured his project Ur Jazz Sonate in Europe and was invited for the Kurt Schwitters exhibition at the Museo de arte moderno in Mexico City. 2015 he peformed at the ZERO exibition at the Gropiusbau in Berlin.www.sharpa.org (current project)
Light: Benjamin Schälike

Deaths, disappearances or farewells are all ways of becoming absent, of loosing something, someone or yourself. At the same time, the things lost remain and bury themselves in our memory, so we’re dancing on the traces of existing graphs, collecting fragments, trying to see a whole that doesn’t exist. We’re carrying water that runs through our hands. If there’s no beginning, there’s no end, no margin, no hierarchy. In his first work with dancers, the theatre-maker Rabih Mroué is interested in the relationships between presence and absence, reality and fiction, focusing on performers’ bodies as sites of archival sedimentation of these questionable boundaries.

DANCE ON is an initiative by DIEHL+RITTER gUG funded by the Federal Government Commissioner for Culture and the Media, co-funded by the Creative Europe programme of the European Union as part of
DANCE ON, PASS ON, DREAM ON


Other DANCE ON Productions: