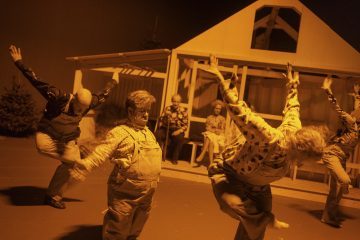 A BERLINER ENSEMBLE production in cooperation with Dance On Ensemble

“Die letzte Station” (The last station) is about the final stage of life. It addresses age, memories of life, death. How do we want to grow old? How do we want to die? What remains at the end? What happens next? Is there an afterlife? And most of all: What is the point of it all?

A small community of ageing, dying men and women come together at the last station. They sing, dance, laugh, and die. At the centre of the story is a dying woman. Hannah is dying. With her at her deathbed is Karl. He tells her stories, hoping that she will regain consciousness, while Hannah floats between dreaming and remembering, life and death. Death, the end of every life, is the central theme in Ersan Mondtag’s powerful creation.

Ersan Mondtag’s signature style encompasses performance, opera, drama and visual art. He thinks and senses in images and entire worlds. When he encounters a topic that interests him, he conjures visual concepts with their own unique power, urging towards the stage. They turn into highly artificial, visually stunning productions. Mondtag’s theatre is formal, with bodies that are choreographed and expressive even without the aid of language.

Celebrated as the ‘emerging talent’ of 2016, Ersan Aygün was born to a family of Turkish immigrants in Berlin. He assumed his stage name Mondtag, a literal translation of his Turkish last name, aged just 17. In the 2013/14 season Ersan Mondtag joined the REGIEstudio at the Schauspiel Frankfurt, realising his first major works at the Stadttheater there.