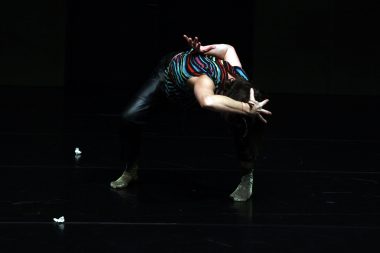 
Claudia Hill is a cross-disciplinary artist who transforms textile into profound objects. Her work ranges from costume design to participatory projects and visual concepts. In New York during the 1990s, Claudia began working in costume design as well as founding her eponymous clothing line. She presented her collections in form of multi-media events during New York Fashion Week, collaborating on installations, conceptual performances, videos and presentations with a wide range of artists such as the musician Skúli Sverrisson, the artist Nelly Agassi and the innovative firm Asymptote Architecture. Her passionate engagement with performance art draws greatly on her own background and training in dance. Now based in Berlin since 2008, Claudia works on visual concepts and costume design for performances with the choreographer Meg Stuart and on artists’ films, such as with Michaël Borremans or Boris Achour. She was commissioned to design costumes for the choreographer William Forsythe and for the New York based ensemble The Wooster Group. Critic Leora Barish wrote about her work: “Hill’s approach is typically playful, iconoclastic, sensual but aesthetically refined, intellectually elegant. Experimentation is always balanced by a scrupulous clarity of purpose, so that each detail is justified, and the whole is graced with dignity and integrity.” Claudia continues to develop her ideas in visual concepts, costume and participatory projects, which to her, offer a rich and challenging whole. “I am interested in making objects that create possibilities for personal encounters and function as mediators: A project that illustrates this well, is a durational proposal I developed in 2011, when I wove a poncho from personal, recycled textiles and sent it on a journey around the world to artist friends. The documentation of their interaction with the poncho is collected in form of a travel journal, and is to be published as a book.”
Light: Benjamin Schälike

Benjamin Schälike has been working as a freelance lighting designer for theatre, opera, dance and performance since 1991, including for: 2 FISH, Alexander Charim, Angela Schubot, Eva Meyer Keller, Felix Marchand, Gesine Danckwart, Hanna Hegenscheidt, Hannah Hurtzig, Hans-Werner Kroesinger, Hermann Heisig, Hyoung-Min Kim, Jee-Ae Lim, Julia Reinartz, Lea Martini, Lupita Pulpo, Martin Clausen, Nir de Wolf, Santiago Blaum, She She Pop, Peter Zadek and White Horse. He is a co-founder of the Tanztage Berlin festival and has been its technical director since 2010. He has also performed this, or a similar, role at other festivals (Expo 2000, Mobile Akademie, Ruhrfestspiele Recklinghausen, Tanz im August, Impulse Tanz – the Vienna International Dance Festival, Tanznacht, Love Parade and Uferstudios Berlin). He has been technical director of the Uferstudios Berlin since 2012. In 2007, together with Inge Koks, he was programmer and artistic director of Tanztage Berlin. In 2006 and 2007, he presented his own productions at the Sophiensaele: Wir steigern uns… (2006) and Das schwierige ist ja, dass es viel einfacher ist… (2007). Since 2007, he has been a guest lecturer for lighting design at the Kunstakademie Düsseldorf, the HFG/ZKM Karlsruhe, in the Choreography department at the Ernst Busch Academy of Dramatic Arts, at HZT Berlin as well as in Seoul (South Korea) and Montevideo (Uruguay).

The focus of the 7 Dialogues, the first production of the 1. EDITION, is on the ensemble members themselves: working with artistic dialogue partners, they are currently developing individual self-portraits that the composer Matteo Fargion will weave into a single, overall composition. Amancio Gonzalez works with London-based visual artist Hetain Patel; Frédéric Tevernini with the French choreographer Noé Soulier; Jone San Martin with the British director, author and performer Tim Etchells, director of the famous performance group Forced Entertainment; Ty Boomershine with the New York choreographer Beth Gill; Brit Rodemund with the London-based choreographer and dancer Lucy Suggate; and Ami Shulman with the French choreographer Étienne Guilloteau. For the seventh dialogue, the Fargion will be working with the dancers to create a full-evening performance from their very different solos and thereby present the entire DANCE ON ENSEMBLE in a congenial, harmonious way.