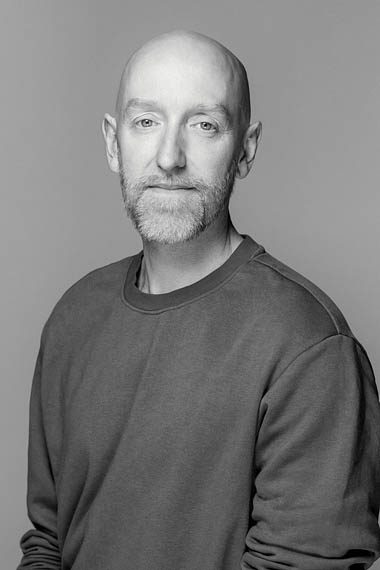 „As a young dancer, I always gravitated towards the older dancers that I saw perform and got to know in classes, both for their abilities and for the weight, emotionally and intellectually, that they carried with them, on and off stage. As I'm now in my 40s, I've found the emphasis on youth in the current dance work on display disappointing. I've seen several examples of companies celebrating the "older" dancer, but this is usually regarding dancers well into their retirement, not dancers who are currently active but aren't in their 20s. So the opportunity to be a part of this project is very exciting and relevant for me.“
Ty Boomershine

Ty Boomershine, was born in the USA in 1968 and studied dance at the Fort Hayes School for the Performing Arts in Columbus, Ohio, completing his studies with a Bachelor of Fine Arts at Stephens College in Columbia, Missouri. In New York he danced for Dan Wagoner, DANCENOISE, Gus Solomons Jr., Bill T. Jones, Ton Simons, Merce Cunningham repertory ensemble, and Lucinda Childs.  In the Netherlands he worked with Rotterdam Dance Group, Karin Post, LeineRoebana, Giulia Mureddu, Emio Greco | PC, and Nicole Beutler.  In 2009 he restaged and performed in Lucinda Childs’ iconic works Dance and Available Light , and in 2012 he performed as a featured soloist in the remounting and subsequent 4 year world tour of Robert Wilson and Philip Glass’s opera Einstein on the Beach.
He has been presenting his own choreographic works since 1993, at Movement Research and at Danspace Project in New York, as well as at OT301 and the Holland Festival in Amsterdam. Since 2007 he has acted as Lucinda Childs artistic assistant staging her works and assisting her on various projects around the world.  He worked as rehearsal director and tour manager for Nicole Beutler / nbprojects and for Pere Faura.  At ICKamsterdam, he undertook curatorial and organisational tasks as well as rehearsal management.
Ty has taught workshops and technique class at professional companies, universities, and open studios throughout Asia, Europe, and the United States.
Ty Boomershine has been a member of the Dance On Ensemble since 2015 and is its Artistic Director since 2019.