Ersan Mondtag was born in Berlin in 1987 and works in the fields of theatre, music, performance and installation. He has worked at Thalia Theater Hamburg, Schauspiel Frankfurt, Maxim Gorki-Theater Berlin and Münchner Kammerspiele, among others. In 2011, he enrolled at Munich’s Otto-Falckenberg-Schule, but abandoned his course after two years to form “KAPITÆL ZWEI KOLEKTIF” in Munich. As a collective, they designed durational performances, experimental party formats and interdisciplinary theatre works, most recently “Party #4 – NSU” at Mixed Munich Arts (MMA). For Pinakothek der Moderne’s “Schaustelle” (or “Show Site”), he and Olga Bach realised the nine-day durational performance “KONKORDIA”. During the 2013/14 season, he was a member of REGIEstudio at Schauspiel Frankfurt and directed “2. Sinfonie” (invited to the 2014 “radikal jung”-festival), “Das Schloss” and “Orpheus#” (invited to the 2015 “radikal jung”-festival in Munich). In 2015, Ersan Mondtag created his play “TYRANNIS”, which earned him an invitation to the 2015 Berlin Theatertreffen. Further guest performances followed, among them a performance at the “radikal jung”-festival. The magazine “Theater heute” chose Ersan Mondtag as “Emerging Director of the Year 2016”. He was similarly distinguished as “Set and Costume Designer of the Year”.  His production "Die Vernichtung" (text: Olga Bach), which was produced at the Konzert Theater Bern, brought Mondtag the second Theatertreffen invitation in a row. In 2017 Theater heute chose him Costume Designer of the Year, and Deutsche Bühne named him Stage Designer of the Year. 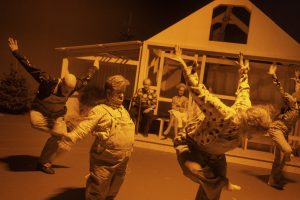